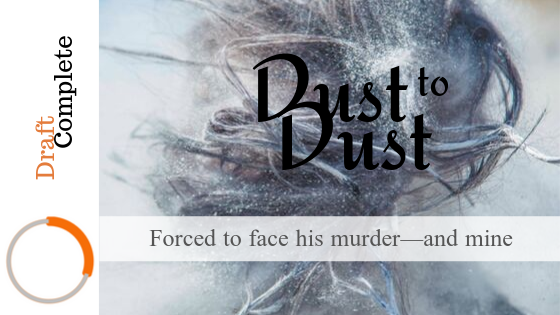 Machines scorch the land. Desolations, she calls them. You don’t fight them–or she didn’t until one killed her only brother. But she never dreamed that inside the machine might be humans like her, and a boy with the eyes of her dead brother.

This is the concept that sparked my current book Dust to Dust: What would you do if you suddenly felt empathy for a boy who participated in the murder of your only brother?

Empathy is complex. It can frighten us. Once we have let in others’ emotions, where do our own emotions go? What do we do when those emotions conflict? How do we resolve injustice or rage? In the end, do we learn to see more clearly, or simply learn to cave in?

In this book, I wanted to walk right up to the heart of empathy. I wanted to sink deep into its fear and stare at it, eye to eye. And then find what it took to lift that empathy, to stretch it high, until, like one of Gandalf’s fireworks, it exploded with wings.

For it is the strong wings of empathy that make our human race possible. Those wings allow us to bond with a friend, to nurture a baby, to build a family or a nation, to have humility and strength, self and society, with a love so large it can carry us through the incredible pain that comes any time we open our eyes so wide.

This is the concept at the heart of Dust to Dust. I’ve just finished draft one, and I can tell I’m only beginning to peel away the layers. I cannot tell you how excited I am to peel away some more.

And so, as I head to revisions, I leave you a glimpse of the moment in which Ash, our protagonist, realizes there is an empathy she needs to face. She has successfully infiltrated the Desolation, a giant, ash-spreading machine, but is now scrambling to escape. And in that scramble, she is forced to kill a man. She even knows his name: Joe. And Joe is the brother of David–the boy who has her brother’s eyes. The boy who killed her brother. We join Ash as she is being pulled to safety by her friend, River:

Ash gripped River’s hand, slowly sitting up to look out of the room that sheltered her team. She still panted from the effort of climbing from the hole, the hole that had eaten Joe as her sling had slid a stone into his skull.

There, across the endless pit where Joe had fallen, was a boy. The recognition of his face clapped through her like lightning, and all the warmth of River’s touch drained away from her. The boy knelt at the edge of the hallway, his pale face lighting up like a flame in the strobing light. His perpetually dark-rimmed eyes were tinged with red, and flooded with tears.

And that face–it was still so like her brother’s. Dust’s face. Dust’s murderer. David.

Ash scrambled to her knees, almost pitching over the edge of the room again. She could distinguish words in his overlapping, swelling cries. Joe, no, Joe, no!

“He…” she whispered. “He’s lost his brother!” I killed his brother, her thoughts corrected.

The others were muttering behind her, and the rope slapped against the floor. No one seemed to hear.

David’s gun, his Chesling 5, lay flat against the floor next to him. His hands clutched the edge of the hallway, where the hallway fell away into the drop, his fingers crawling as his body leaned over, shivering, shouting, dripping tears. The rawness of his sobs was clawing into her chest, burning her throat.

She coughed as her own sob struggled to emerge, struggled to touch his sorrow with her own. Her sorrow over . . .

Dust. The bone-consuming scream sounded through her mind: The sound she had made when she’d watched her own brother die. At David’s hands.

She couldn’t breathe, her breath trapped in a terrible conflict as two desires crushed her lungs: A desire to both kill this boy and to mourn with him. Her sight darkened and she could feel the arms of the orchard tree wrapped around her while she stared, as David stared now, at the place where a brother had scattered into ashes.

Update: As I continue to learn to writing my thoughts into novels, I have decided to set this story aside. It has been a valuable step on my journey as a writer, and I cannot wait to reexamine these characters and concepts with the more fully-equipped tool-belt of a more experienced writer.