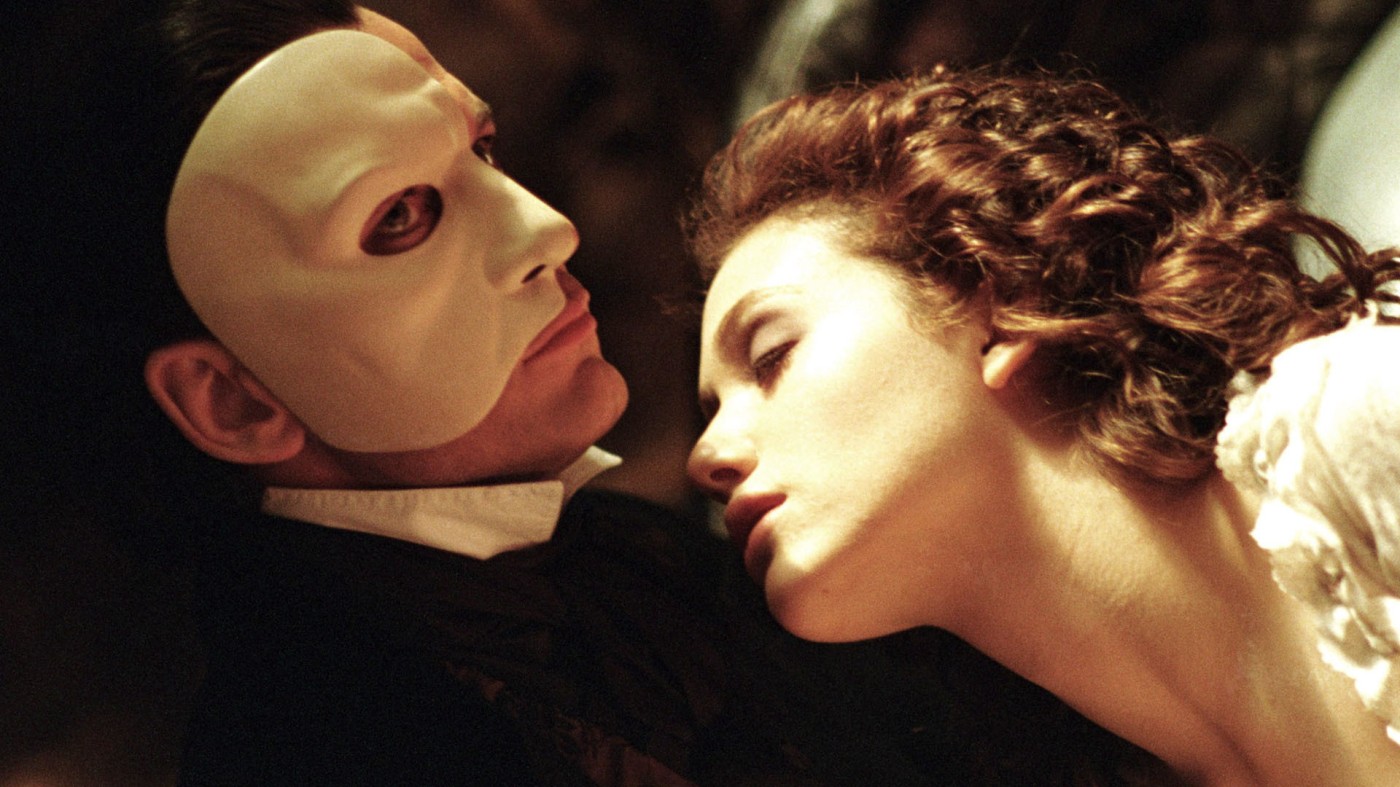 The entire story of The Phantom of the Opera revolves around Christine. Both the phantom, a musical genius who lives in the bowels of the opera house, and Raoul, her childhood sweetheart, fall passionately in love with her. But as the music sweeps, the men pursue, and swords clash, all of the action seems to be happening to or around Christine.

She becomes the star of the opera house, is abducted and abused by the phantom, engaged to Raoul, and abducted once more . . . yet she remains more ghostly than the phantom, passive and inert. Like an object.

Christine’s story is the story of being sexually abused. She is a victim of her own story, and of the Phantom’s persistent passion. Since we live in a society rampant with sexual abuse, it is not unusual that we would want to tell this story. Within the United states, one in five women will be raped at some point in their lives. This is something we are experiencing as a society. This is something we are desperately trying to work through.

It makes sense that we would long to tell the story of the entrapment, confusion, undeserved guilt, and despair that victims of abuse face. Telling such a story could be a way to work through the abuse we have received, and to prepare others to break free of of its bonds.

But this is not what Phantom of the Opera does for us. Instead, it reinforces the cycle of abuse, promoting it as a natural, expected, and even desirable outcome of a woman’s beauty. This film heavily reinforces one of the most damaging concepts that can cause victims to remain in abusive situations: The idea that the victim is an object, an object which will only be valued for its sexual appeal.

Christine is Valued for Only Her Sexual Appeal

From the beginning of the film, Christine is praised. However, there are only two features mentioned in this praise: her beautiful body, or her beautiful voice.

It begins with her body. When we are first introduced to Christine, she is wearing a slave’s costume that exposes her belly and legs completely. This costume emphasizes her sexuality, and symbolizes her inability to stop others from preying on her. But the implications are not left to symbolism alone. As the new managers of the opera house examine the chorus girls, one exclaims to Madame Giry, “And that exceptional beauty?” pointing to Christine. “No relation, I trust?” Madame Giry had already warned him against making eyes at her daughter.

“I also think of her as a daughter,” Madame Giry responds coldly.

Even in this simple introduction of Christine, only two things are emphasized: First, she is helpless (this is shown through the slave’s garb and her lack of parental protection), and second, she is lusted after (as clearly shown through the manager’s attention). It seems to be all that needs to be said about her.

The attention to Christine’s body–and indeed all female bodies–continues to be prominent. As Christine is compared to Carlotta, the self-centered “prima donna,” it is their sexuality that is compared. How do they show that Christine is better than Carlotta? By having the audience try to court Christine and give her roses. How do they show Christine is a better singer? By having her fellow actors slap Christine’s behind–instead of Carlotta’s. It is an ambiance that cannot be escaped. Even the background characters can only show their approval of Christine by valuing her sexuality.

This theme is cemented by the nature of Christine’s relationship with the phantom. The only praise the phantom gives her, which he repeats often, is the beauty of her voice. And his lust for her voice translates seamlessly to lust for her body.

When we are first introduced to the phantom, he lures Christine down to his domain through a trick mirror. During this scene, he displays all the skills of a sexual abuser: He uses his connection with her father to assure trust. (Christine believes he is the “angel of music” her father often talked of.) He also uses this self-appointed position of music-teacher to be her “master” and to claim “power” over her. (Listen to the song in this scene, it’s all there). And, as he slowly desensitizes her to more and more touch, he begins to openly grope her.

This is why he is her music teacher, this is why he haunts her. It is all to exploit her beauty. And this does not stop for the entire film. Christine is sought as a marriage or sexual partner by every male who encounters her. Beauty is the only characteristic they can see.

Why This Is a Problem

When we assume that a woman’s only value lies in her beauty, we bind her in some very specific and terrifying ways. As we focus on her external appearance, we begin to see her as an object. We want to preserve that beauty, we want to be able to turn it about and examine it more closely. We want this beautiful woman to be an object.

In other words, when we value beauty above all else, we often begin sending a message that that woman should be passive. All of her efforts should go towards being physically pleasing–not towards developing or using her inner resources of intelligence, creativity, will, and determination.

Psychologist Renee Engeln Ph.D explains how subtly we spread this damaging concept. Take a look at the phrases we automatically reach for when we meet a little girl: “How cute.” “What a pretty dress!” “Your hair is so beautiful today.” What do all these focus on? Appearance.

Engeln explains that this focus on appearance can cause real damage: “When we spend a lot of time talking about something, we send a message that the topic is important. . . And when we constantly tell little girls how pretty they are, we’re communicating that looks matter, and that they matter especially for girls. When we comment on a girl’s cuteness more consistently than anything else about her, we suggest that her appearance means more than her other qualities.”

Ah–“her appearance means more than her other qualities.” We tell her it is her exterior, not her interior that matter, that give her worth.

And when a girl believes that, truly believes that, then attention to beauty becomes the only compliment. Being preyed upon shows them they are worth something. Loss of agency, and the suppression of will and independence seem the only way to find self-esteem. And suddenly, sexual abuse becomes inescapable.

Christine’s entire world reinforces the idea that her value lies in her beauty and passivity. And so, she follows along. She is passive. She is an object. Throughout the film, she never acts for herself.

This is shown clearly in her first scene with the phantom. She obeys everything he asks of her. She follows him down his creepy tunnel, takes his hand, lets him touch her in invasive ways. None of her reactions are unique. Instead, she is a perfect reflection of the phantom’s demands. We never see a flicker of individuality or will inside of her.

And she does not change when Raoul enters the scene. Instead she simply reflects whichever man is closer. During a pivotal scene in the middle of the film, Christine runs to the roof of the opera house with Raoul, to not be overheard by the phantom. But Christine’s initiative stops there. She begins the scene by paying attention to Raoul, but the moment she hears the phantom’s call, she switches from reflecting Raoul to reflecting the phantom. She drifts away, her face goes blank (again, like an object), and she seems to forget that Raoul is there. Raoul has to physically reach out to her and redirect her towards him. As Raoul talks, she switches back, willingly reflecting this new man instead. She is easily pulled from one man to the other–and never once does she actively choose for herself.

And the Movie Romanticizes It

It is terrifying to realize that this is normal behavior for anyone in an abusive situation. An abuser’s tactics reinforce the precariousness of the victim’s self-worth, pulling them deeper and deeper into an internal crisis, where self-worth can only be won through pleasing the abuser, through becoming his object.

This lie, that self-worth is determined by one’s beauty, and by the attention’s of one’s abuser, is exactly what this movie should be debunking. But it does not. No. Instead, it romanticizes this lie.

This romanticization of her objectification is tied together during the climax. Christine is trapped by the phantom in his lair, and Raoul has found them–and been trapped himself. The phantom is threatening Raoul’s life, and Christine, standing helplessly to the side, is the only one who can act. But the only way she can see forward, the only “answer” the film affords her, is to allow herself to continue to be abused: Her final, “winning” move is to give her abuser what he wants, and to kiss him fully and passionately.

And the movie, as if applauding her move, makes it work. Raoul is set free, and Christine is allowed to leave with him. Christine is shown that the only power she has, the only way to move forward, is through allowing the abuse. Even in this final moment, Christine does not have the will, the clarity, the agency to be a human–only to be an object.

The Phantom of the Opera is just one example of media that romanticizes the objectified woman. Look up at the billboards next time you drive. Look at the ads scrolling by your Facebook page. Look at the latest movie posters. You will see emphasized breasts and passive positions in at least a third of them–if not more. There’s a reason the mantra of the advertising business is “sex sells.” But it’s not just selling products–it’s selling away the agency of our women.

Christine is not the only woman you know who obsesses over her appearance, whose self-esteem hinges on how she looks. Who believes her only power lies in pleasing an abuser.

Let us wake up. How will we push against the media that so casually romanticizes the trap of abuse? How can we expose this lie in our society and in ourselves? What can we do to empower the victims of this lie? How can we struggle to keep our eyes open?